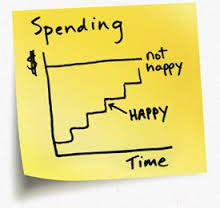 So what’s wrong with materialism, whose fault is it anyway and how can we fix it?  While Madonna made it big with her hit song, “Material Girl,” a nod to Marilyn Monroe’s sultry, “Diamonds Are a Girl’s Best Friend,” materialism is by no means a modern phenomenon. Its roots are biblical.

After the proverbial Flood, lone survivors Noah and his family stepped out of the Ark into a pristine world. They were tasked with beginning the story of Man again. And it didn’t go well.

Noah became intoxicated, and while he was laying about naked in a drunken stupor, he was castrated by one of his three sons, Ham. In the first known act of forced population control, Ham robbed Noah of the ability to procreate.  With the entire world – literally – before his feet, Ham was nevertheless driven by the insanely delusional belief that the world was not big enough to accommodate a fourth son.

There is a well-known Jewish adage, “middah keneged middah,” which means, “measure for measure.” As punishment for not understanding the purpose of life, Ham’s descendants were cursed with slavery, a state of existence devoid of that which makes life worth living.

It’s a given that money issues and financial stress can cause strife in a relationship. Modern life can drive bad decision-making, inducing us to buy things we don’t need with money we don’t have. Mistakenly believing that it is getting whatever we happen to want that will truly make us happy, we enslave ourselves in this futile pursuit, oblivious to the joke that all the rat race is good for is making faster rats.

Being flush, however, doesn’t prevent marital discord. As a matter of fact, studies show that when both spouses in a marriage are highly materialistic, they struggle more emotionally, report more anxiety and depression, and have less life and relationship satisfaction.  One reason is that excess materialism drives couples to externalize their priorities, therefore spending less and less time nurturing their relationship

One antidote is to break the materialistic mindset. Family researcher James Carroll said, “I think it’s about people stepping back and taking an inventory of their values and what is important to them. Are we allowing some of our materialistic ambitions to get in the way of things that, at the core, matter a lot to us?” When we don’t understand the real cost of materialism, sadly, it is our relationships that pay the price.

The Happiness that Money Can Buy

On the other hand, if we spend money on what truly matters, it is possible that money can buy happiness. In the book, “Happy Money, The Science of Happier Spending,” authors Dunn and Norton posit that buying experiences instead of buying things create more long-lasting happiness.

Furthermore, buying experiences with the people we love builds connection and creates an upward spiral of positivity. A good friend of mine plans her family vacations with one goal in mind: “I want to create memories.”

Happiness is not based on money affluence, but rather, time affluence. Before making a purchase ask yourself whether this will change the way you use your time.   Focusing on time rather than money will help you choose activities that focus on well being.  One of the biggest complaints of unhappy couples is that they don’t spend enough time together.  Eventually, failing to invest time makes it impossible to keep a marriage healthy and loving.

The Lesson of the Fourth Son- An Attitude of Gratitude

Our matriarch Leah is the first person in recorded history to express gratitude to God, and she did that when she gave birth to her fourth son, Yehuda, whose very name means “thank you.” Unloved by Jacob, she gave her first three sons names designed to arouse Jacob’s love for her. With her fourth son, however, Leah shifted her attention, and instead of focusing on the negative, she embraced an attitude of gratitude, which opened her up to the positive in her life.

This seemingly small shift nevertheless created cosmic consequences. Ham’s warped views prevented the birth of a fourth son, and he unleashed misery into the world.   Leah, on the other hand, opened up the spiritual channel of gratitude and from that act, blessings ensued.   It is from Yehuda, that King David descended, and ultimately it is from Yehuda’s lineage that the Messiah will be born.

Developing an attitude of gratitude can break us free from voluntary servitude to the money monster.  And since our very well being depends on relationships, spending time –  our most valuable currency – on our relationships, measure for measure, yields the greatest return on our investment.